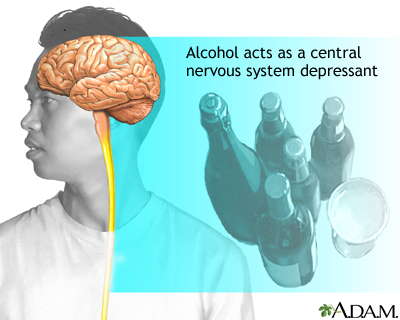 There is good evidence from studies of families and twins that genetics plays an important role in the development of alcoholism. However, hundreds of genes likely are involved in this complex disorder, with each variant contributing only a very small effect. Thus, identifying individual risk genes is difficult.

Using a new approach that combines genome-wide association studies (GWAS) with information about which human proteins interact with one another, researchers from the University of Iowa and Yale University Medical School have identified a group of 39 genes that together are strongly associated with alcoholism.

“The discovery of these genes may open a new window into the biological mechanisms underlying this alcoholism disorder,” says Shizhong Han, PhD, UI assistant professor of psychiatry and corresponding author of the study, which was published Nov. 21 in the American Journal of Human Genetics. “Eventually, it’s our hope that the findings might help to develop drugs to treat or prevent this disorder.”

Han and his colleagues based their approach for identifying risk genes on the idea that genes may be “guilty by association” of contributing to the disease—that although many different genes contribute to alcoholism, these genes, or more precisely, their protein products, are not independent of each other.

“The proteins made by these genes could be neighbors, or they could be part of the same functional biological pathway,” Han explains. “We took advantage of their biological relatedness to identify a network of genes that interact and together contribute to the susceptibility to alcoholism.”

The team conducted the study by using two large data sets collected for the genetic study of addiction - the Collaborative Study on the Genetics of Alcoholism (COGA) and the Study of Addiction: Genetics and Environment (SAGE). These data sets document genome-wide common variants information from several thousand people linked to information about these individuals’ alcohol dependence or other types of addiction.

To minimize the possibility of the result being a false positive, the researchers also analyzed the gene network for associations with other complex human diseases - bipolar disorder, depressions and diabetes. The gene network was not associated with any of these conditions.

In addition to finding the highly statistically significant association between the gene network and alcoholism, many of the genes identified also appear to be biologically relevant to brain processes likely to be affected in alcoholism. For example, the network contains genes for ion channel proteins that appear to be involved in tolerance toward some of the physiological effects of alcohol. Other genes code for proteins involved in general brain processes, including synaptic transmission, ion transport, and transmission of nerve impulses.

Having identified this network of genes, Han and his colleagues plan to narrow down the group to look for the genes that cause alcoholism.

Jennifer Brown
.(JavaScript must be enabled to view this email address)
319-356-7124
University of Iowa Health Care