Children in England drink more alcohol and take more drugs than their counterparts in most of the Western world.

A report from the World Health Organisation shows that English schoolchildren are among the most likely to have drunk alcohol in the past week, to have taken cannabis and to have had sex.

Eleven and 13 year olds are among the most likely to have smoked a cigarette.

And they are more stressed at school than any country except Portugal, mirroring a Unicef study last year which found British children were the most unhappy in Europe.

The report, the Health Behaviour in School-Aged Children, paints a bleak picture of a childhood blighted by pressure to fit in with peer groups and perform well in tests.

The damning report shows that Welsh 13-year- olds are more likely than those in any other country in Europe to have been drunk at least twice.

Some 26 per cent of girls and 27 per cent of boys aged 13 in Wales have been drunk, followed closely by Scotland.

England is not far behind, with 19 per cent of 13-year-old girls and 21 per cent of boys saying they have been drunk -  the fourth highest in Europe.

Among 15-year-olds England is fifth in the league table, with no fewer than 50 per cent of girls and 44 per cent of boys having been drunk at least twice.

Conservative health spokesman Andrew Lansley said: ‘It is tragic that so many children in this country have been sucked into alcohol abuse at such a young age.

This is yet more evidence of the social breakdown that has occurred under this Government.’

The findings, compiled by the University of Edinburgh in partnership with the World Health Organisation, were based on interviews with 240,000 children in Europe and North America-aged 11, 13 and 15. The report also raised concerns over the use of cannabis.

English 15-year-olds are the eighth most likely to smoke cannabis, and in Wales they are third on the table, with 30 per cent having used the drug. 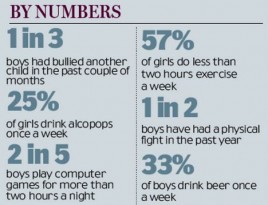 ‘Many use cannabis as a crutch but unfortunately that often makes things worse. We need to see more education so young people understand the danger of drugs.’

The report shows that smoking rates for 15-year-olds are among the lowest in England, and are much better than the other countries of the UK.

But it raises concerns about children smoking as young as 11. England is seventh in the table of the number of children who smoke at this age: 1 per cent of girls and 2 per cent of boys.

British children also have sex at a much younger age than many of their European counterparts. Wales was third in Europe, followed by Scotland at 6th and England at 10th.

This is likely to have had an impact on teenage pregnancy rates, which are higher in the UK than anywhere else in western Europe.

Schoolchildren in England and Wales also feel under more pressure than those in almost every country which took part in the study.

The survey found 65 per cent of 15-year-olds in Wales and England felt ‘pressured’ from schoolwork -  more than every country except Portugal.

Mick Brookes, general secretary of the National Union of Headteachers, said: ‘This report backs what we have been saying about the increasing amounts of pressure being put on children with the testing and exam system.

‘We want to see the focus on enjoyment and excellence in education, rather than just testing which simply causes children to have a tough time.’

A spokesman for the Department of Health said: ‘We want all services to work together to support children and families to meet their own health goals.’