The causes of schizophrenia are not known. However, an interplay of genetic, biological, environmental, and psychological factors are thought to be involved. We do not yet understand all the causes and other issues involved, but current research is making steady progress towards elucidating and defining causes of schizophrenia.

In biological models of schizophrenia, genetic (familial) predisposition, infectious agents, allergies, and disturbances in metabolism have all been investigated.

The current concept is that multiple genes are involved in the development of schizophrenia and that factors such as prenatal (intrauterine), perinatal, and nonspecific stressors are involved in creating a disposition or vulnerability to develop the illness.

Neurotransmitters (chemicals allowing the communication between nerve cells) have also been implicated in the development of schizophrenia. The list of neurotransmitters under scrutiny is long, but special attention has been given to dopamine, serotonin, and glutamate.

Also, recent studies have identified subtle changes in brain structure and function, indicating that, at least in part, schizophrenia could be a disorder of the development of the brain.

It is important for doctors to investigate all reasonable medical causes for any acute change in someone’s mental health or behavior. Sometimes a medical condition that might be treated easily, if diagnosed, is responsible for symptoms that resemble those of schizophrenia.

Brain scans using magnetic resonance imaging (MRI) have shown a number of abnormalities in the brain’s structure associated with schizophrenia. Such problems can cause nerve damage and disconnections in the pathways that carry brain chemicals. 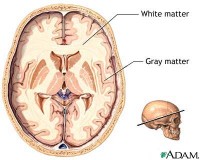 Gray and white matter of the brain Because these problems tend to show up on brain scans of people with chronic schizophrenia rather than newly diagnosed patients, some experts believe they may be a result of the disease and its treatments rather than a cause. (Medications used for schizophrenia can also cause brain shrinkage over time.)

Abnormal Brain Activity and Volume. Imaging techniques have revealed abnormal brain activity and shrinkage (reduced volume) in the brains of people with schizophrenia. Of particular importance are those in the prefrontal cortex, which contains the white matter of the brain, and the temporal lobes, which contain the limbic system.

The limbic system of the brain is a group of structures that control emotions and behavior. This system (in particular, the hippocampus and amygdala) is involved in the formation of long-term memory, and is closely associated with the olfactory structures, which play a role in the sense of smell.

Click the icon to see an image of gray and white matter of the brain.

Abnormal Brain Chemicals. Schizophrenia is associated with an unusual imbalance of neurotransmitters (chemical messengers between nerve cells) and other brain chemicals, such as dopamine overactivity, glutamate, reelin, and others. Whether any changes in these chemicals in the brain is a cause or a consequence of schizophrenia remains unclear.

Abnormal Circuitry. Abnormalities in brain structure are also reflected in the disrupted connections between nerve cells that are observed in schizophrenia. Such miswiring could impair information processing and coordination of mental functions. For example, auditory hallucinations may be due to miswiring in the circuits that govern speech processing. Strong evidence suggests that schizophrenia involves decreased communication between the left and right sides of the brain.

Schizophrenia undoubtedly has a genetic component. The risk for inheriting schizophrenia is 10% in those who have one immediate family member with the disease and about 40% if the disease affects both parents or an identical twin. Family members of patients also appear to have higher risks for the specific symptoms (negative or positive) of the relative with schizophrenia.

Researchers are seeking the specific genetic factors that may be responsible for schizophrenia in such cases. Current evidence suggests that there are a multitude of genetic abnormalities involved in schizophrenia, possibly originating from one or two changes in genetic expression. Scientists are beginning to discover the ways in which specific genes affect particular brain functions and cause specific symptoms. Genes that have been studied include the neuregulin-1 gene, the OLIG2 gene, and the COMT gene.

Heredity does not explain all cases of the disease. About 60% of people with schizophrenia have no close relatives with the illness.

The case for viruses as a cause of schizophrenia rests mainly on circumstantial evidence, such as living in crowded conditions. The risk is higher for people who are born in cities than in the country. The longer one lives in the city, the higher the risk. The following are some studies suggesting an association:

Some researchers have found an association between some cases of schizophrenia and toxoplasmosis, a parasite carried by cats and other domestic animals. Several studies suggest that patients with schizophrenia have an increased prevalence of antibodies to toxoplasmosis. Toxoplasmosis can lie dormant in the nervous system and migrate to the brain over many years.

Although parental influence is no longer believed to play a major role in the development of schizophrenia, it would be irresponsible to ignore outside pressures and influences that may exacerbate or trigger symptoms. The prefrontal lobes of the brain, the brain areas often thought to lead to this disease, are extremely responsive to environmental stress. Given the fact that schizophrenic symptoms naturally elicit negative responses from the patient’s circle of family and acquaintances, negative feedback may intensify deficits in a vulnerable brain and perhaps even trigger and exacerbate existing symptoms.

Dr.  Susan Talbot was the psychologist assigned to Kevin’s case when he and Natalie arrived at the mental health clinic. First, Dr. Talbot assessed Kevin’s symptoms and learned about his recent behaviors. Kevin told her about his fear that the radio station where he was working was broadcasting information about him.

Her next step involved taking a detailed family history to assemble even more information to help her formulate a diagnosis. Having Natalie there was invaluable because she was able to offer a great deal of insight.

Natalie and Kevin are first cousins by their fathers. Kevin’s father is an engineer and works for the Department of Defense.

Kevin’s mother is a secretary for an insurance company. Both parents are quiet people, and very kind and responsible. From the age of seven, Natalie was raised by Kevin’s parents when her mother left to marry another man. Natalie’s father was in and out of psychiatric hospitals, allegedly for depression and psychotic symptoms. When Natalie was 18, her father committed suicide.

Natalie, now 25, is a bright and friendly woman. She attended the University of Maryland and works as a first-grade teacher.

She is close to her aunt and uncle who raised her and she feels partially responsible for helping them take care of Kevin. Kevin is also 25 years old. Although Natalie and Kevin went to the same high school, they did not share the same friends. Kevin started high school as a popular, athletic student but by the time he was a senior he had very few friends. He became obsessed with music from the 1980s, especially Morrissey, and spent a lot of time reading about the Smiths and practicing the guitar. Natalie was always kind to Kevin, and stood up for him when her friends called him a “freak.”

After high school, Kevin attended a local junior college and moved in with Natalie when they were both 20.

Natalie doesn’t remember much about her father. Although her uncle visited him in the hospital repeatedly, he didn’t feel it was an appropriate place for Natalie. Kevin never met Natalie’s father and knows very little about his life. Natalie was raised to believe that her father loved her very much but was unable to express it. When he died, she felt little sadness because she knew his life was painful for him. Now she is concerned that Kevin is experiencing the same problems as her father and wants to help him.

Newcomer JW. Metabolic considerations in the use of antipsychotic medications: a review of recent evidence. J Clin Psychiatry. 2007;68 Suppl 1:20-7.