In the past, researchers could only examine the brain after a patient died. Now, there is technology that allows researchers to examine the brains of living people. New techniques, including magnetic resonance imaging (MRI), are rapidly advancing our knowledge about the brain and schizophrenia. Still, there are several challenges to studying brain structure and function in relation to a major mental illness. One such challenge includes figuring out whether differences in the brain were present before the illness and thus part of the cause, or if they are the result of symptoms.

If one’s ventricles are large compared to what is normal for a brain of a particular size, that means that there is less functional brain tissue. Enlarged ventricles are not unique to schizophrenia and are associated with several other disorders of the brain, including Alzheimer’s disease and chronic alcohol use. Other studies using MRI support the theory that schizophrenia patients have less working brain tissue. Studies have shown that there is a 3 percent reduction in brain volume in schizophrenia patients relative to normal,  healthy study participants. This lower brain volume has been identified early in the schizophrenic illness, thus suggesting that this general brain abnormality may come before the illness rather than resulting from repeated psychotic episodes or medication taken to treat symptoms of schizophrenia.

Figure 4.1 This graphic shows the results of a 2004 study examining the risk of schizophrenia for children with prenatal exposure to influenza.
© AP Images

Although several parts of the brain have been found to be different in schizophrenia patients, two areas have received the most clinical attention. The first are the frontal lobes of the brain, which are the areas directly behind the forehead that are responsible for planning and problem solving. This area is among the last to completely mature in normal individuals.

Problems in frontal lobe functioning may appear as difficulties in concentration and attention. Many schizophrenia patients appear to have these problems. One task by which researchers can study frontal lobe function is called the Wisconsin Card Sort Test (WCST).  In the WCST,  participants are asked to look at cards and sort them according to color, shape, or number. The test administrator will not tell the participant the rule by which they should sort but will tell the participant if they are sorting correctly. Someone without frontal lobe damage will try to sort according to one rule, perhaps number, but will change to shape or color until the administrator tells them they are correct. After the participant sorts a few cards, the test administrator changes the rule and now the participant must try to figure out the new rule.  Most people have no problem with this task. They will change from number to color or shape until the administrator tells them they are correct. But for someone with schizophrenia or another form of frontal lobe damage, the rule change can present a real challenge. These patients might keep sorting the cards according to the old rule, a process called perseveration. 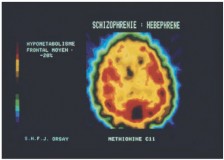 When researchers study brain activity while a patient is participating in the WCST, they find that there is decreased activity in the frontal lobes in patients with schizophrenia relative to normal, healthy participants.

Another part of the brain that may be implicated in schizophrenia is the thalamus. The thalamus is a small,  oblong collection of sensory and motor processing areas in the center of the brain. Commonly considered a major relay center of the brain, the thalamus receives most of the information collected from our environment via sensory organs (eyes, ears, skin) and makes connections with areas of the cortex and brainstem. The circuitry that connects the thalamus with other brain areas, including the frontal lobes and the cerebellum, may be impaired in patients with schizophrenia.  Indeed,  some preliminary research by Nancy Andreasen at the University of Iowa suggests that these thalamic pathways may be implicated in a number of schizophrenic symptoms.