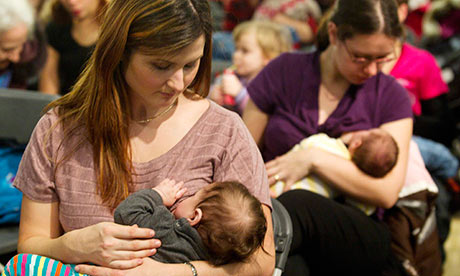 New mothers in the Philippines spend more time in the bedroom with their partner in the first few weeks after giving birth than they did before they became pregnant. This might be a type of survival strategy to keep the relationships with the fathers of their new babies alive and well, to ensure continued support for their offspring. So says Michelle Escasa-Dorne of the University of Colorado in the US, after studying how women from a society with a low divorce rate such as the Philippines adapt to being both mothers and lovers. The study appears in Springer’s journal Human Nature.

A range of studies previously conducted on how women in Western societies experience the first six weeks after giving birth show that they tend to devote more time to their offspring’s well-being than to their partner. This leads to lower relationship satisfaction and less intercourse between partners, and a clear shift from so-called mating efforts to parenting efforts. Escasa-Dorne set out to understand if similar trends are also found among women in a non-Western population with a low divorce rate.

She questioned 260 women who were in a relationship and living in the Philippines’ capital of Manila. Of these, 155 women still breastfed. They completed questionnaires about their sexual functioning and menstrual cycles, as well as about how satisfied and committed they were in their current relationships. The women were between 18 and 35 years old, mostly married, well-educated, and had on average two or three children.

Breastfeeding women who had already resumed having their periods were more sexually active and committed than others.

This suggests that women in Manila experience an increase in sexual activity after the birth of their children that may even be higher than pre-pregnancy levels. According to Escasa-Dorne this is consistent with a strategy in which women continue to invest in their current committed relationships. The postpartum sexual increase may be a means of continuing investment in a satisfactory, successful relationship in which future children can be successfully reared. For a mother in a stressful relationship - perhaps reflecting an unsatisfactory romantic relationship with her partner, or lack of support otherwise - resuming a sexual relationship may not be a priority as she focuses on her infant.

“Even though a breastfeeding woman may not be sexually proactive, she may respond favorably when her partner initiates sexual activity. Maintaining the relationship may be important if one’s current partner is beneficial to the partnership and to the tasks of parenting,” said Escasa-Dorne, summarizing this relationship maintenance strategy.

Escasa-Dorne does wonder whether cultural norms did not influence some of the participants’ responses to questions about their sexual relations and relationships. She notes that childless women may be more hesitant to note their openness or enjoyment of sexual intimacy than those who have given birth. In the Philippines, many couples continue to live with their parents or in-laws after being married, especially if they have not yet had children.