Teens who exercise and play team sports are less likely to be smokers or use marijuana and other drugs, according to a new study.

However, the results also showed that high school students on athletic teams drank more alcohol than their peers.

While the findings don’t prove cause and effect, they could have important implications for preventing drug and alcohol abuse in young adults, the authors write in the journal Addiction.

Promoting exercise in young people and making sure that student athletes are targeted for alcohol prevention, for instance, would be important first steps in addressing the issue, said Yvonne Terry-McElrath, one of the study’s authors from the University of Michigan in Ann Arbor.

Still, she cautioned that the links found in the study “were not staggeringly large,” and that encouraging exercise is “certainly not a cure for anything.”

The researchers used data from a study sponsored by the National Institute on Drug Abuse that followed high school seniors through young adulthood with regular surveys. 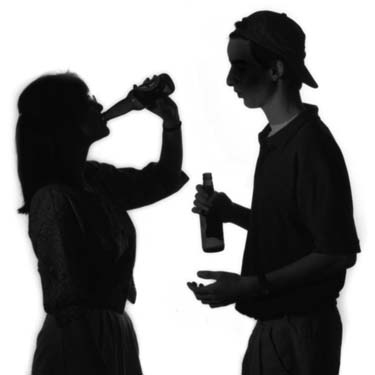 Those surveys asked about recent use of alcohol, cigarettes, and drugs, as well as participation in athletics and general exercise.

The current report included data on close to 12,000 students, about half of whom filled out follow-up surveys until they were 25 or 26 years old.

Students who participated in team sports or general exercise more often were less likely to use cigarettes, marijuana, and other illicit drugs as seniors. And those that upped their physical activity over the next few years also reported smoking and using drugs less often as time went on.

Being involved in team sports meant teens were more likely to drink frequently - but that didn’t extend to people who exercised, though not as part of a team.

About 45 percent of non-exercisers said they had drunk alcohol in the last month, which rose to 57 percent in those who regularly played a team sport.