Scientists are reporting development of three promising formulations that could be used in a vaccine to treat methamphetamine addiction — one of the most serious drug abuse problems in the U.S. The report appears in the Journal of the American Chemical Society.

In the paper, Kim Janda and colleagues note that methamphetamine use and addiction cost the U.S. more than $23 billion annually due to medical and law enforcement expenses, as well as lost productivity. The drug, also called “meth” or “crystal meth,” can cause a variety of problems including cardiovascular damage and death. Meth is highly addictive, and users in conventional behavioral treatment programs often relapse. Previously tested meth vaccines either are not effective or are very expensive. To overcome these challenges, the researchers made and tested new vaccine formulations that could potentially be effective for long periods, which would drive down costs and help prevent relapse.

Methamphetamine is a powerfully addictive stimulant that dramatically affects the central nervous system.  The drug is made easily in clandestine laboratories with relatively inexpensive over-the-counter ingredients.  These factors combine to make meth-amphetamine a drug with high potential for widespread abuse.

Methamphetamine is commonly known as “speed,” “meth,” and “chalk.”  In its smoked form it is often referred to as “ice,” “crystal,” “crank,” and “glass.”  It is a white, odorless, bitter-tasting crystalline powder that easily dissolves in water or alcohol.  The drug was developed early in this century from its parent drug, amphetamine, and was used originally in nasal decongestants and bronchial inhalers. Methamphetamine’s chemical structure is similar to that of amphetamine, but it has more pronounced effects on the central nervous system.  Like amphetamine, it causes increased activity, decreased appetite, and a general sense of well-being. The effects of methamphetamine can last 6 to 8 hours.  After the initial “rush,” there is typically a state of high agitation that in some individuals can lead to violent behavior.

Methamphetamine is a Schedule II stimulant, which means it has a high potential for abuse and is available only through a prescription that cannot be refilled.  There are a few accepted medical reasons for its use, such as the treatment of narcolepsy, attention deficit disorder, and for short-term use obesity;  but these medical uses are limited.

The group found that three of the new formulations that produced a good immune response in mice (stand-ins for humans in the lab) were particularly promising. “These findings represent a unique approach to the design of new vaccines against methamphetamine abuse,” say the researchers.

The abuse of methamphetamine – a potent psychostimulant – is an extremely serious and growing problem. Although the drug was first used primarily in selected urban areas in the Southwestern part of the United States, we now are seeing high levels of methamphetamine abuse in many areas of the Midwest, in both urban and rural settings, and by very diverse segments of the population.

As part of our Methamphetamine Research Initiative, the National Institute on Drug Abuse (NIDA) has developed this publication to provide an overview of the latest scientific findings on this drug. Methamphetamine is a powerfully addictive stimulant associated with serious health conditions, including memory loss, aggression, psychotic behavior, and potential heart and brain damage; it also contributes to increased transmission of hepatitis and HIV/AIDS. 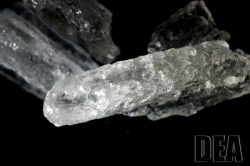 One of NIDA’s most important goals is to translate what scientists learn from research to help the public better understanddrug abuse and addiction and to develop more effective strategies for their prevention and treatment. We hope this compilation of scientific information on methamphetamine will help inform readers about the harmful effects of methamphetamine abuse and will assist in prevention and treatment efforts.

The authors acknowledge funding from the National Institute on Drug Abuse and The Skaggs Institute for Chemical Biology.