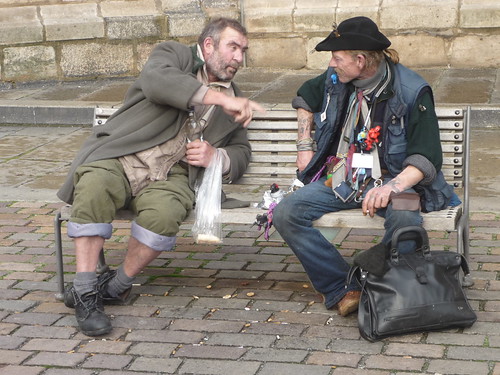 A phenomenological study offers detailed insights into homeless, alcohol-dependent patients often stigmatized by the public and policymakers as drains on the health care system, showing the constellation of reasons they are incapable of escaping social circumstances that perpetuate and exacerbate their problems The study, published online yesterday in Annals of Emergency Medicine, was conducted at Bellevue Hospital in New York City, which has a long history of service to the city’s indigent population.

“One hundred percent of patients enrolled in the study began drinking alcohol as children, becoming alcohol-dependent shortly thereafter,” said study author Ryan McCormack, MD, of New York University School of Medicine in New York, N.Y.  “For people who have homes and jobs, it is difficult to imagine the level of despair these people experience day in and day out, or the all-consuming focus on getting the next drink that overrides even the most basic human survival instinct.  Most do not come to my ER voluntarily, but end up there because of public intoxication.  The majority of patients in this study consistently left the hospital prior to the completion of medical care.”

Dr. McCormack and his team interviewed 20 homeless, alcohol-dependent patients who had four or more annual visits to Bellevue Hospital’s emergency department for two consecutive years.  All began drinking in childhood or adolescence, and 13 reported having alcoholic parents.  Thirteen patients reported abuse in their childhood homes.  Nineteen were either forced to or chose to leave home by age 18.  Only one was married.  None of the subjects was employed.  The three who were military veterans said that military life amplified their alcohol use.

Alcoholism was cited as the primary reason for living on the street.  Eleven patients had definitive psychiatric diagnoses in the psychotic, mood or anxiety spectrums.

All 20 reported having entered detoxification programs at some point in the past.  Within a year of being interviewed for this study, one-quarter of the patients had died as a direct result of their alcoholism from liver or lung cancer, vehicular trauma, assault or hypothermia.

“As their capacity to envision a future diminishes, they increasingly lose motivation for personal recovery,” said Dr. McCormack.  “An alcoholic is first a human being.  We hypothesize that more accessible, lower-barrier, patient-centered interventions that support alcohol harm reduction and quality of life improvement can be translated into the emergency department setting and this population.”