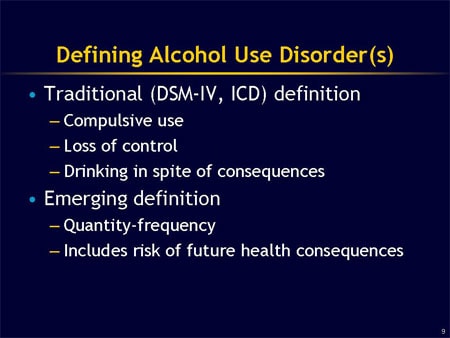 There are two traits closely associated with the development of alcohol use disorders (AUDs). One is a lower subjective intoxication response, also known as a low level of response to alcohol. The second is a greater propensity for reward seeking behaviors, as indexed by personality traits. Given that the best-studied neurobiological system related to drug-seeking behaviors is mesolimbic dopamine, this study investigated the relationship between these two qualities and striatal dopamine responses to alcohol, finding that striatal dopamine responses to alcohol ingestion may serve as a neurobiological marker of vulnerability to AUDs.

Results will be published in the January 2014 issue of Alcoholism: Clinical & Experimental Research and are currently available at Early View.

“A large body of research has implicated a role for dopamine in reward-seeking behaviors in general,” said Marco Leyton, professor of psychiatry at McGill University as well as corresponding author for the study. “For example, in both laboratory animals and people, increased dopamine transmission seems to enhance the ability of reward-related stimuli to grab attention and attract you. This effect likely contributes to why having one drink increases the probability of getting a second one – the alcohol-induced dopamine response makes the second drink look all the more desirable.”

“Many studies have further established that brain dopamine (DA) systems in an area of the brain called the striatum – especially the ventral striatum – are engaged by most drugs of abuse, including alcohol,” added Terry E. Robinson, Elliot S. Valenstein Distinguished University Professor of Psychology & Neuroscience at The University of Michigan.

“Of course, these brain systems did not evolve to mediate the effects of drugs, but are normally involved in mediating the motivational properties of ‘natural’ rewards such as food, water, and sex. These DA systems appear to be especially important in determining the degree to which rewards become desired. So, if they are activated to an abnormal degree, this can result in pathological ‘wanting’ or ‘craving’ for associated rewards. This is what drugs of abuse are thought to do – they increase DA activity more than what is normal, and when taken repeatedly, the ability of drugs to activate DA systems is often further increased or ‘sensitized.’”

“Previous studies have indicated that drinking an alcoholic beverage can increase striatal dopamine release in humans,” said Leyton. “To our knowledge, this is the first study examining the relation between dopamine transmission and the low intoxication marker of alcoholism risk.”

Researchers recruited 26 healthy social drinkers (18 men, 8 women) from the Montreal area, 18 to 30 years of age, who were at different levels of risk for alcoholism. All participants completed a self-report questionnaire of lifetime drug and alcohol use, a timeline follow-back questionnaire for the previous 12 months, as well as several personality measures. Each participant also received two positron emission tomography (PET) [11C] raclopride scans after administration of either placebo or oral alcohol (1ml/kg body weight of 94% alcohol, 0.75g/kg; about 3 drinks in 15 minutes) in a randomized and counterbalanced design.

There are known risks for and protective factors against the development of alcohol use disorders (AUDs).
A new study has found that striatal dopamine responses to alcohol ingestion may serve as a neurobiological marker of vulnerability to AUDs.
Specifically, when given alcohol, those at high risk showed an increase in brain dopamine and those at low risk actually showed a decrease in brain dopamine.

“We found that people vulnerable to alcoholism might experience an unusually large response in the brain’s reward-seeking pathway when they take a drink,” said Leyton. “This finding is compelling. For example, a large dopamine response might energize reward seeking and counteract the sedative effects that are the focus of the intoxication measure. Conversely, people who experience minimal dopamine release when they drink might find the sedative effects of alcohol especially pronounced.”

“There are very few neurobiological ‘markers’ that predict risk for later drug or alcohol abuse, and the fact that these researchers were able to identify such a marker is significant,” said Robinson. “The response variation found is important because it suggests that individual differences in how the DA system is ‘tuned,’ so to speak, may determine not only the response to alcohol but the propensity for later problems with its use.”

“As researchers,” said Leyton, “we find accumulating evidence that there are multiple pathways to alcoholism, each associated with a distinct set of personality traits and neurobiological features. These individual differences likely influence a wide range of behaviors, both positive and problematic. The present study suggests that a tendency to experience a large dopamine response when drinking alcohol might contribute to one or more of these pathways, influencing propensities to impulsive reward-seeking behaviors. For people with loved ones struggling with alcoholism, the present study helps us answer the question: ‘How did they develop this problem?’ And understanding the causes of addictions is an important step toward developing treatments and preventing the disorder in others.”

While Robinson observed that researchers are still a long way from being able to use the kind of neurobiological marker identified in this study to make strong predictions about individuals, he also noted the importance of studies that increase our knowledge of how drugs of abuse can have quite different effects in different individuals.

“Everyone’s brain is different and different brains are influenced in quite different ways by many sorts of experiences – not just drugs of abuse,” he said. “Only a small proportion of those individuals who try drugs of abuse, including alcohol, go on to abuse them and to develop addiction. People vary dramatically in their risk to develop many kinds of brain disorders and this is in part because they have different brains to start with. Of course, the factors that result in such enormous diversity of brains are very complex and involve very complex interactions between genetic and environmental factors. We need to understand these differences in both assessing risk and in the development of treatments, as it is becoming increasingly clear that one size does not fit all.”