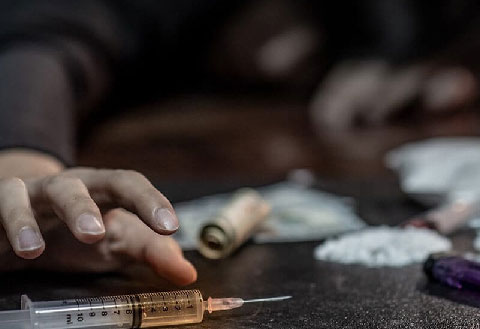 Krokodil, a dangerous, heroin-like narcotic that rapidly rots flesh, may have made its first appearance in the United States, according to Arizona health officials.

This week, toxicologists at the Banner Good Samaritan Poison and Drug Information Center in Phoenix said they had seen a “handful” of patients believed to have taken krokodil. The drug has been around for a decade and became a serious problem in Russia, but its use has never before been documented in the States.

“As far as I know, these are the first cases in the United States that are reported,” Dr. Frank LoVecchio, a co-medical director at the center, told the local CBS affiliate. “So we’re extremely frightened.”

The drug, officially known as Desomorphine, is a concoction made by cooking codeine with other ingredients, including iodine and red phosphorous - the stuff match strike pads are made of. It can also include noxious additives like paint thinner, gasoline, lighter fluid, and hydrochloric acid.

Given the ingredient list, it’s not surprising then that the drug has some gruesome, sometimes fatal, side effects.

Krokodil causes the skin to turn a scaly, reptilian green around the area where it is injected. Hence the name, which, as you may have guessed, is Russian for “crocodile.”

When used repeatedly, it leaves festering, pungent sores and ruptured blood vessels, causing skin and muscle tissue to rot from the inside - in extreme cases, leaving users’ bones exposed through gaping holes. It can also cause permanent brain damage, resulting in speech impediments and spastic movements that, combined with the nasty skin-related symptoms, have led some to dub it a zombie drug.

Though users may think they’ve filtered the harmful chemicals out of the mixture before injecting it into their bodies, “there is still remnants of it,” LoVecchio said. “You can imagine just injecting a little bit of it into your veins can cause a lot of damage.”

The average life expectancy for krokodil addicts in Russia is two to three years, according to TIME.

This week, toxicologists at the Banner Good Samaritan Poison and Drug Information Center in Phoenix said they had seen a “handful” of patients believed to have taken krokodil. The drug has been around for a decade and became a serious problem in Russia, but its use has never before been documented in the States.

“As far as I know, these are the first cases in the United States that are reported,” Dr. Frank LoVecchio, a co-medical director at the center, told the local CBS affiliate. “So we’re extremely frightened.”

Desomorphine attracted attention in 2010 in Russia due to an increase in clandestine production, presumably due to its relatively simple synthesis from codeine. Reports of its use there date back to 2003. The drug is easily made from codeine, iodine and red phosphorus, in a process similar to the manufacture of methamphetamine from pseudoephedrine; like methamphetamine, desomorphine made this way is often highly impure and is contaminated with various toxic and corrosive byproducts. The street name in Russia for homemade desomorphine is “krokodil” (Russian: крокодил, crocodile), reportedly due to the scale-like appearance of skin of its users and the derivation from chlorocodide. Due to difficulties in procuring heroin, combined with easy and cheap access to over-the-counter pharmacy products containing codeine in Russia, use of “krokodil” has increased. The high associated with krokodil is akin to that of heroin, but lasts a much shorter period. While the effects of heroin use can last four to eight hours, the effects of krokodil do not usually extend past one and a half hours, with the symptoms of withdrawal setting in soon after. Krokodil takes roughly 30 minutes to an hour to prepare with over-the-counter ingredients in a kitchen. Since the homemade mix is routinely injected immediately with little or no further purification, “krokodil” has become notorious for producing severe tissue damage, phlebitis and gangrene, sometimes requiring limb amputation in long-term users. Although there are not many, addicts’ life expectancies are said to be as low as two to three years due to injecting drug users’ high susceptibility to infections and gangrene.

So why in the name of all that’s good would anyone want to try krokodil?

For one, it’s incredibly cheap compared to heroin. It’s essentially the meth of opiates, its primary ingredient found in easily obtainable cold medicine tablets. A single injection can cost one-tenth the price of a similar-sized dosage of heroin.

And much like heroin, it’s hard to kick the habit once hooked. The high wears off after less than two hours, leaving users with painful withdrawal symptoms. Worse, though, is that the withdrawal can last longer than a month, compared to a week for heroin withdrawal.

The drug emerged in Siberia back in 2002 and quickly spread across Russia, eventually popping up in parts of Western Europe. But there have yet to be confirmed cases of it in the U.S. The Drug Enforcement Administration and Centers for Disease Control and Prevention don’t even have any information about the drug on their websites, though a DEA official told Mother Jones they’ve been “scrambling to see what we know about the cases in Arizona.”

For now, officials know of only a few suspected cases. However, there’s reason to believe more may be on the way.

“Where there is smoke there is fire,” LoVecchio said, “and we’re afraid there are going to be more and more cases.”

By Jon Terbush
The Week