Typical antipsychotic medications are most effective in treating positive symptoms such as hallucinations and delusions. Although some patients may improve after only a week or two of treatment, the most complete effects of these medications are usually seen after six to eight weeks. Unfortunately, treatment with typical antipsychotic medications does cause some uncomfortable side effects. Many patients experience significant weight gain,  drowsiness,  or dry mouth.  Some patients experience extra-pyramidal side effects (EPS),  which are uncontrollable bodily movements such as muscle spasms or shaking. Other medications can be used to minimize extrapyramidal side effects, although the relief is only temporary.

In fact,  studies have shown that patients who take typical antipsychotic medications for 10 years or more may develop a serious condition called tardive dyskinesia in which patients experience involuntary movements of the tongue, lips, and neck. Tardive dyskinesia is very uncomfortable and can be embarrassing to many patients.

- John Hinckley Jr.
John Hinckley Jr.  was,  by all accounts,  a normal child.  Born
to successful and wealthy parents,  John was the youngest of
three children.  His mother doted on him and remembers him
being quiet and introspective.  In high school,  John spent most
of his time alone in his room,  playing his guitar and listening
to the Beatles.  Although his parents attributed his isolation to
shyness,  high school classmates recall that he was odd and
a loner.


After high school,  John completed a year of college in Texas
before dropping out to pursue his dream of becoming a song-
writer. He moved to Hollywood, found an apartment, and worked
on his music.  While in California,  he watched the movie Taxi
Driver more than 15 times.  He became obsessed with the story
of an American recluse who stalks a political candidate.

In 1979,  John Hinckley bought his first gun,  which was to
become part of a collection.  Personal photographs reveal him
holding a gun to his temple on two occasions.  According to
later reports,  John played Russian roulette twice shortly after
he acquired his first handgun.  By 1980,  John was experienc-
ing more symptoms of mental illness.  He began treatment with
antidepressants and tranquilizers.  Despite his psychiatric prob-
lems, John continued to add to his gun collection.

In May of 1980,  John Hinckley read an article in People maga-
zine about the actress Jodie Foster.  In the article,  he learned that
the actress was enrolled at Yale.  Hinckley was impressed by Foster
because of her role in Taxi Driver. He decided to enroll in a writing
course at Yale so that he could be close to her.  While there,  John
tried to establish a relationship with the actress.  He wrote her let-
ters and poems and left them for her in her mailbox.  Because his
attempts at making contact with her were largely unsuccessful,
he decided to try something different to get her attention.

John Hinckley believed that by assassinating the president,  he could
obtain Jodie Foster’s love and devotion.  On Monday,  March 30,
1981,  John wrote a letter to Jodie Foster describing his plan to
assassinate President Reagan.  He went to Washington,  D.C.,  and
checked into a hotel.  In the afternoon,  he left his hotel room and
took a cab to the Washington Hilton,  where President Ronald
Reagan was to speak to a labor convention. 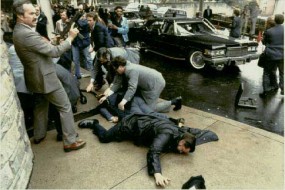 Figure 5.2 Would-be assassin John Hinckley is wrestled to
the ground after his attempt on President Reagan’s life.

At 1:30 p.m.,  John fired six shots.  The bullets from Hinckley’s
gun struck Ronald Reagan in the chest,  Reagan press secretary
James Brady in the temple,  police officer Thomas Delahanty in
the neck,  and Secret Service agent Timothy J.  McCarthy in the
stomach.  Hinckley was immediately arrested and was tried for
his crime a year later.  On June 21,  1982,  after seven weeks
of testimony and three days of deliberation by the jury,  John
Hinckley was found not guilty by reason of insanity.  He currently
lives at St.  Elizabeth’s Hospital in Washington,  D.C.,  where he
is treated for schizophrenia.
—

This may help alleviate all types of schizophrenia symptoms but not cause the movement disorders associated with typical medications.

Unfortunately, there are side effects associated with atypical antipsychotic medications. Like the earlier medications, atypical medications can cause drowsiness and weight gain. In very rare cases, clozapine can cause a blood disorder called agranulocytosis. In order to prevent this condition, patients taking clozapine must take weekly blood tests to monitor their blood count.