Brain cells, called neurons, are responsive to different kinds of neurotransmitters and have receptors built specifically for them. Neurons that are sensitive to specific neurotransmitters tend to cluster together, creating circuits in the brain for processing specific kinds of information. 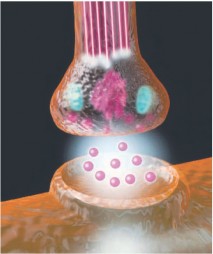 Figure 4.4 This computer graphic of a synapse shows the release of neurotransmitters (pink spheres at lower center) by vesicles inside the synaptic knob (upper center). The neurotransmitters will cross the gap and bond to the receptors of the adjacent cell, which is how information is transmitted along the nervous system. © Alfred Pasieka/Photo Researchers, Inc.

There are many different neurotransmitters in the brain. Two that have been found to be involved in schizophrenia symptoms are dopamine and glutamate.  Dopamine is primarily involved in movement and thoughts. Dopamine has also been associated with novelty seeking, or interest in new experiences and reward. Some illegal drugs, such as cocaine and methamphetamine, work by affecting dopamine function in the brain. Thus, dopamine is associated with feelings of pleasure and well-being.

Dopamine pathways in the brain are highly specialized and may influence different kinds of thinking or behavior. People with high levels of dopamine in certain parts of the brain may also experience psychotic symptoms or paranoid thinking, symptoms of schizophrenia.

Due to several lines of converging evidence, many scientists believe that dopamine is the cause of many schizophrenic symptoms. The “dopamine hypothesis” dates from the 1960s and emerged from three important observations. In 1952, a drug called clorpromazine was first used to treat schizophrenia.

It worked by blocking dopamine receptors and was successful in treating many schizophrenia patients. A second observation involved the effects of amphetamines. Amphetamines work by making the brain think that there is too much dopamine in the system. People who abuse amphetamines often experience schizophrenia-like symptoms, primarily paranoia and auditory hallucinations. Parkinson’s disease is a disease in which patients experience physical movement problems.

Patients with Parkinson’s are treated with a drug that effectively increases the level of dopamine in the brain. This drug, called L-DOPA, has been associated with complications or side effects that look a lot like schizophrenic symptoms. Patients treated with L-DOPA sometimes experience psychotic symptoms, which provide researchers with more evidence that high levels of dopamine in some parts of the brain are implicated in schizophrenia.

One problem in studying dopamine in schizophrenia is that we can only directly study the presence of dopamine in autopsies. Presently, we can study the metabolite of dopamine, the substance that remains in the body after dopamine is used.

The metabolite of dopamine, HVA, can be found and measured in our cerebrospinal fluid, which is the fluid we have in our spinal column and in the ventricles of our brain.

In order to measure this fluid, patients must endure a spinal tap, which requires the insertion of a long needle into the spine to access the fluid. This is a painful procedure,  and there are risks of infection and complications. Because of these risks, few people are willing to undergo this procedure to be part of an experimental study.

Studying how neurotransmitters work is especially challenging.  However,  these investigations can provide crucial information about what causes schizophrenia and how best to treat it.