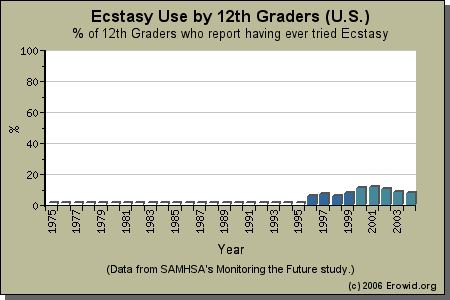 Ecstasy, also known by its chemical abbreviation MDMA, is an illicit drug that is commonly taken at nightclubs and dance parties. Ecstasy’s street names include: “Molly” (U.S.), “Mandy” (U.K.), “E,” and “X.”  Although not limited to nightlife scenes, ecstasy is popular at dance parties, as it tends to enhance the party experience (e.g., perceptions of lights and music, nightlife socialization).

A study just published in the journal Substance Use & Misuse by researchers affiliated with New York University’s Center for Drug Use and HIV Research (CDUHR), examined a national sample of high school seniors to determine who is currently at high risk for ecstasy use.  Although ecstasy use in the U.S. is not as prevalent as in the late 1990s and early 2000s, its use remains popular among adolescents and young adults. The authors feel the popularity of ecstasy use may be related to increasing popularity of electronic dance festivals.

“We found that roughly 4.4% of high school seniors reported use of ecstasy within the last year, with males being at particularly high risk for use,” said Joseph J. Palamar, PhD, MPH, a CDUHR affiliated researcher and an Assistant Professor of Population Health at NYU Langone Medical Center.  “We delineated many important sociodemographic risk factors, but the most consistent and important risk factor we found is use of other drugs.”

The study, “An Examination of Sociodemographic Correlates of Ecstasy Use Among High School Seniors in the United States,” used data from Monitoring the Future (MTF), a nation-wide ongoing annual study of the behaviors, attitudes, and values of American secondary school students.

The MTF survey is administered in approximately 130 public and private schools throughout 48 states in the US. Roughly 15,000 high school seniors are assessed annually.  The researchers examined the most current data for high school seniors (modal age = 18), focusing on 26,504 students from 2007-2012.

Researchers found that females and religious students were consistently at lower odds for use. Black and Hispanic students, and students residing with two parents, were at lower odds for ecstasy use, unless other substance use was already present.

“Odds of use were consistently increased for students with weekly income of >$50 from a job or >$10 weekly from other sources. Students residing in a city were also at increased risk, as were those who reported lifetime use of alcohol, cigarettes, marijuana, or other illicit drugs,” said Dr. Palamar.  “This is among the first studies to examine how student income is related to ecstasy use.”

The researchers also note that trends in ecstasy use across racial groups have been shifting in recent years. Although White students have the highest prevalence of ecstasy use overall, rates of use among Hispanics is now close to that of Whites, and rates in Blacks have increased over recent years.  Additionally, rates of ecstasy use might actually be higher than reported as some students may not know that “Molly” is the same drug as MDMA/ecstasy (as MTF did not ask about Molly specifically).

Given the positive expectations of experiences many adolescents associate with ecstasy, the researchers say that prevention efforts should focus on educating adolescents and young adults at highest risk with regard to the potential harmful effects of ecstasy, and just as importantly, education needs to continue to focus on preventing use of drugs that normally precede ecstasy use.

“Ecstasy use also tends to precede use of other club drugs so preventing ecstasy use (e.g., among those who attend nightclubs and parties) may also prevent initiation and use of drugs such as ketamine (“Special K”) and GHB,” said Dr. Palamar. Harm reduction messages (e.g., steps to prevent health related risks such as dehydration) disseminated as part of the nightclub and dance event scenes are needed for those who reject abstinence. However, prevention messages geared toward users who are not affiliated with nightlife scenes (e.g., because they are too young to attend clubs and may use ecstasy at home or parties) may be particularly challenging. In addition, Dr. Palamar warns that “Hundreds of new designer drugs have emerged in recent years, some of which were created to mimic the effects of ecstasy. Many individuals may be ingesting what they think is ecstasy, but it may in fact be an even more dangerous new substance. Likewise, today ecstasy commonly comes in powder form instead of pill form, which may even further increase the chances of receiving the drug cut with additional designer substances.”

While many public health messages about ecstasy use have been traditionally calibrated toward club attendees, the researchers advocate for drug education geared toward the general population that can more fully educate those at risk for ecstasy use along with education of other more “traditional” drugs.

“Harm reduction education is greatly needed, regardless of where and under what circumstances the drug is taken,” notes Dr. Palamar. “As ecstasy becomes increasingly popularized and often contains adulterants, those who reject abstinence need to be able to make informed decisions about use in order to minimize potential harmful effects.”

Acknowledgements: This project was not funded. The National Institute on Drug Abuse, Inter-university Consortium for Political and Social Research, and Monitoring the Future principal investigators, had no role in analysis, interpretation of results, or in the decision to submit the manuscript for publication.  Monitoring the Future data were collected through a research grant (R01 DA-01411) from the National Institute on Drug Abuse (NIDA), National Institutes of Health (NIH). The content is solely the responsibility of the authors and does not necessarily represent the official views of the principal investigators, NIH or NIDA

CDUHR, funded by the National Institute on Drug Abuse, is the first center for the socio-behavioral study of substance use and HIV in the United States. The Center is dedicated to increasing the understanding of the substance use-HIV/AIDS epidemic, particularly among individuals in high-risk contexts. The Center’s theme is “Discovery to Implementation & Back: Research Translation for the HIV/Substance Use Epidemic.” The Center facilitates the development of timely new research efforts, enhances implementation of funded projects and disseminates information to researchers, service providers and policy makers.

NYU College of Nursing is a global leader in nursing education, research, and practice. It offers a Bachelor of Science in Nursing, a Master of Science and Post-Master’s Certificate Programs, a Doctor of Philosophy in Research Theory and Development, and a Doctor of Nursing Practice degree.