In response to the growing opioid crisis, several states, including Massachusetts and Rhode Island, have granted pharmacists the authority to provide naloxone rescue kits without a prescription to at-risk patients. This model of pharmacy-based naloxone (PBN) education and distribution is one of the public health strategies currently being evaluated at hundreds of pharmacies in both states to determine the impact on opioid overdose death rates.

Led by researchers at Boston Medical Center (BMC), Rhode Island Hospital, and the University of Rhode Island College of Pharmacy, the Massachusetts and Rhode Island protocols could serve as models for implementation at pharmacies across the country, or internationally, to help reach patients at risk for opioid overdose and their families. These protocols are outlined online in a new, open-access article published in Harm Reduction Journal.

Opioids are a class of medication that have been used for thousands of years to treat pain. They come in a variety of physician-prescribed forms, such as morphine, oxycodone, and fentanyl, as well as the common street forms like heroin. Opioid overdose deaths now far outnumber any other causes of accidental death among adults in both Massachusetts and Rhode Island, including car crashes.

“We are encountering an unprecedented public health crisis related to opioid abuse and overdose,” said Traci Green, PhD, MSc, deputy director of BMC’s Injury Prevention Center and associate professor of emergency medicine at The Warren Alpert Medical School of Brown University, who served as the article’s first author. “Given that nearly every community has a pharmacy, there is a tremendous opportunity to help save lives by allowing pharmacists to provide naloxone rescue kits to those at risk for overdose.”

Naloxone is an opioid agonist that reverses the fatal side-effects of an opioid overdose. Traditionally, naloxone must be prescribed by a physician. The PBN distribution programs in Massachusetts and Rhode Island, however, allow the pharmacist to provide naloxone to at-risk populations including patients who use illicit drugs and to those who may be at risk of overdosing from a prescribed medication - all without the explicit instruction by a physician. As the first retail chain to embrace PBN, Walgreens Pharmacy pioneered this model in Rhode Island, working collaboratively with the researchers. The Walgreens pilot program quickly went statewide and expanded to Massachusetts in response to large spikes in overdose deaths. Many other pharmacies, including CVS Pharmacy, Eaton Apothecary, BMC Pharmacy, and Lifespan Pharmacy, now also stock and provide naloxone. 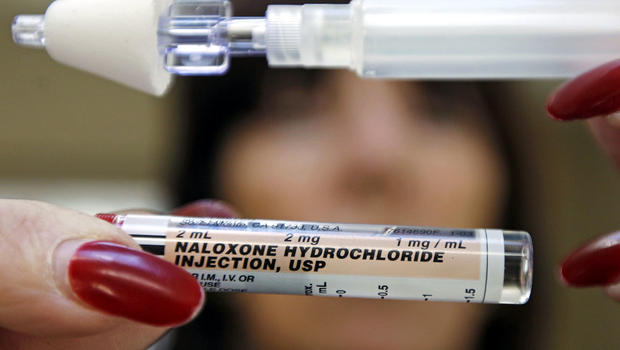 Based on this article’s evaluation, population data on naloxone prescriptions and opioid death trends from Rhode Island suggest that the increased access to naloxone through pharmacies and other programs is slowing the epidemic in the state when compared to substantial increases in overdose death seen in surrounding states.

“Creating these `behind-the-counter’ pharmacy models for naloxone allows greater access and availability to people who may not be comfortable or able to obtain naloxone from syringe exchange programs or drug treatment programs, and especially to communities outside of urban settings,” Green said. “Unfortunately, not all communities have harm reduction or treatment services available, but pharmacies are everywhere.”

As a leader in addiction medicine, BMC recognized early on the need for such interventions, and in 2009, was the first hospital in the country to provide overdose prevention education and naloxone rescue kits to emergency department patients at risk for opioid overdose.

While each state has different laws and regulations about how naloxone rescue kits can be dispensed, the models currently used in Massachusetts and Rhode Island could provide a framework from which other states could build their own PBN. In addition, Scotland is the only country in the world where pharmacists can provide naloxone without a prescription at pharmacies nationwide, while countries such as Canada and Australia are exploring how pharmacies can play a role in naloxone education and distribution.

This month, Green also received a $1.3 million grant from the Agency for Healthcare Research and Quality to support a demonstration project of pharmacy-based naloxone rescue kits to help reduce opioid addiction and overdose death in Massachusetts and Rhode Island. The study will be conducted in partnership with Rhode Island Hospital in Providence and CVS Health, based in Woonsocket, Rhode Island, which has pharmacies throughout the U.S.

Boston Medical Center is a private, not-for-profit, 496-bed, academic medical center that is the primary teaching affiliate of Boston University School of Medicine. It is the largest and busiest provider of trauma and emergency services in New England. It offers specialized care for complex health problems and is a leading research institution, receiving more than $118 million in sponsored research funding in fiscal year 2014. In 1997, BMC founded Boston Medical Center Health Plan, Inc., now one of the top ranked Medicaid MCOs in the country, as a non-profit managed care organization serving Massachusetts and New Hampshire. Boston Medical Center and Boston University School of Medicine are partners in the Boston HealthNet - 13 community health centers focused on providing exceptional health care to residents of Boston. For more information, please visit http://www.bmc.org.

Founded in 1863, Rhode Island Hospital in Providence, R.I., is a private, not-for-profit hospital and is the principal teaching hospital of the Alpert Medical School of Brown University. A major trauma center for southeastern New England, the hospital is dedicated to being on the cutting edge of medicine and research. Last year, Rhode Island Hospital received more than $50 million in external research funding. It is also home to Hasbro Children’s Hospital, the state’s only facility dedicated to pediatric care. For more information, visit http://www.rhodeislandhospital.org.

About the University of Rhode Island and its College of Pharmacy


The University of Rhode Island has many of today’s leading innovators, researchers and creative problem solvers. The University is known regionally and worldwide for its big ideas and pioneering research in such areas as air, water, and ground pollution; biotechnology and life sciences; engineering, marine sciences, forensic sciences, pharmaceuticals, behavioral sciences, and public health promotion. Unique interdisciplinary courses and research projects provide its 13,000 undergraduate and 3,000 graduate students with cutting-edge experiences. URI’s College of Pharmacy is located in a new, $75 million facility where faculty and students are conducting the highest quality research in pharmaceutical, biomedical, clinical and population-based sciences. The College is also going deep into the ocean and forest to find natural substances that could prevent and fight diseases. Target areas include cancer, aging, diabetes, Alzheimer’s disease, HIV, infectious diseases, disability and public health. The College has attracted about $61 million in National Institutes of Health funding to expand biomedical research capacity at nearly every college in the state and is playing leading roles in URI’s Interdisciplinary Neuroscience Program and the George & Anne Ryan Institute for Neuroscience.