A new paper out of the iPrEx study - a randomized, placebo-controlled trial of daily oral HIV pre-exposure prophylaxis (PrEP) in men and transgender women who have sex with men- reported no link between taking Truvada for oral PrEP and experiencing depression.

During the iPrEx study, depression was the most frequently reported adverse event. As the use of Truvada for HIV prevention increases, it is important to understand the impact of PrEP on depression and whether depression can hinder PrEP.

“We’ve shown Truvada to be safe and effective for HIV prevention,” says senior author Robert Grant, MD, MPH, a senior investigator at the Gladstone Institutes. “Because previous studies suggested a link between certain antiretroviral therapies and depression, we wanted to explore whether or not there was an increased risk for psychosocial health problems associated with PrEP.”

The current study, published in AIDS and Behavior, systematically examined whether there was a causative link between Truvada and depression. Comparing scores on a depression and a suicidal ideation scale administered during the study, the researchers found there was no difference in depression or suicidality between participants who received Truvada or placebo. There was also no difference in the number of depression-related adverse events between the two study groups. In addition, there was no evidence that PrEP was less efficacious in depressed participants.

However, half of all participants in the iPrEx study, regardless of the study arm they were in, reported depression scores over the threshold for clinically significant depression. It is well documented that rates of depression are substantially higher among gay men and transgender women who have sex with men.

“Depressive symptoms are associated with sexual practices that increase risk for HIV acquisition,” said first author Patricia Defechereux, PhD, a senior research associate at the Gladstone Institutes. “The additional protection conferred by PrEP during episodes of depression could avert infections during these especially vulnerable times.” 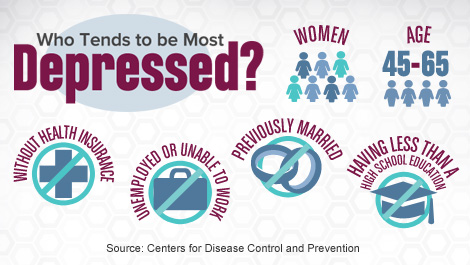 About the Gladstone Institutes

To ensure our work does the greatest good, the Gladstone Institutes focuses on conditions with profound medical, economic, and social impact - unsolved diseases of the brain, the heart, and the immune system. Affiliated with the University of California, San Francisco, Gladstone is an independent, nonprofit life science research organization that uses visionary science and technology to overcome disease.