Biomedical engineers at Duke University have developed an inexpensive and easy-to-use system that allows mothers to give their newborns a potentially life-saving dose of an anti-HIV medication shortly after birth. This is especially important since such drugs can only be found in clinics or hospitals, which can be days away from an expectant mother.

Timing is crucial for the newborn.

In order to be effective, the drug, known as Nevirapine, must be given to the newborn within days of birth.

The challenge to date has been reaching distant mothers who give birth at home. Since most mothers are not up to traveling that soon after delivery to get medication, the biomedical engineers developed a way of providing the medication in a simple manner and with a long shelf-life—pouches made of foil and plastic that can hold a single dose of Nevirapine.

“In Africa, the World Health Organization (WHO) estimates that more than 90 percent of 430,000 new cases of AIDS in 2008 were attributable to mother-to-child transmission,” said Carolina Gamache, program coordinator in senior researcher Robert Malkin’s Developing World Healthcare Technology Laboratory at Duke’s Pratt School of Engineering. “A single dose of Nevirapine right after birth has been shown to be effective in protecting the baby from the virus, but it has been difficult for many reasons to make this option available to women who give birth at home.” 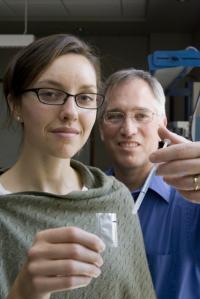 Caroline Gamache and Robert Malkin are researchers at Duke University
Gamache presented the results of the Duke research in London at the Appropriate Healthcare Technologies for Developing Countries conference, which is sponsored by WHO and the Institute of Engineering and Technology. Her paper describing the team’s results was selected by judges as the conference’s top research paper.

While healthcare workers in Africa have in the past tried packaging single doses by other means – syringe s and containers – they have all suffered from evaporation during storage and loss of preservatives. This is not an issue for bulk quantities of the drug, which are common in clinic and hospital pharmacies.

Also, as Gamache explained, drug manufacturers have not shown much interest in devising single-dose systems because of development costs and limited marketing potential outside the Third World. The new pouch, which was fabricated at Duke, has been shown in tests to greatly reduce evaporation while remaining potent at various temperatures – all greatly extending its life span.

“In our system, the pharmacist can fill an individual pouch for women early in their pregnancy, and they can take it home with them,” Gamache said. “When the baby is born, the mother can then easily rip off the corner of the pouch and empty the drug into the newborn’s mouth. Further treatments can be given to the baby at the clinic or hospital later when travel becomes easier for the mother.”

The WHO estimates that just 32 percent of infants born to HIV-positive mothers received prophylactic antiretroviral drugs like Nevirapine, compared to 45 percent of their pregnant mothers.

“If borne out in upcoming clinical trials, it would be expected that the current gap in anti-retroviral prophylaxis between mothers and their children could be reduced with the pouch,” Malkin said. “This could be accomplished at little additional cost and could be a significant step in creating a generation of children free of HIV.”

The team has conducted field testing the past year on the use of the pouches with nurses and pharmacists in Tanzania, and based on the encouraging results, they are planning clinical trials to determine if the new system can reduce the number of mother-to-child cases of HIV transmission.

Although the latest studies were conducted with Nevirapine, the Duke researchers also plan to test the system with other anti-HIV medications and combinations of medications.

The research was supported by Duke’s Research in Practice Program and the Provost’s Common Fund. Pratt undergraduates Michael Spohn, Shannon Skinner and Peter Horgan were also part of the team.