A multidisciplinary team of researchers from UCLA and India has found that a new type of intervention program, in which lay women in the rural Indian province of Andra Pradesh were trained as social health activists to assist women who have HIV/AIDS, significantly improved patients’ adherence to antiretroviral therapy and boosted their immune-cell counts and nutrition levels.

The lay women were trained by the research team to serve as accredited social health activists, or ASHA, and their work was overseen by rural nurses and physicians. These ASHA then provided counseling and support to the women with HIV/AIDS, as well as assistance aimed at removing the barriers they face in accessing health care and treatment.

In India, 2.47 million people are affected with HIV/AIDS, and more than half are women. The epidemic is shifting from urban to rural areas, and the rice-producing Andhra Pradesh district in southeastern India is at the epicenter; this area has the highest total number of HIV/AIDS cases of all states in the country, with nearly 20 percent of the population infected.

For the intervention study, women with HIV/AIDS in Andra Pradesh were randomly selected to participate either in the intervention, called AHSA-LIFE (AL), or in a control group.

Over a six-month period, the ASHA visited the women in the AL group to monitor the barriers they faced in accessing health care and adhering to their antiretroviral therapy and provided assistance to help mitigate these barriers. The ASHA also provided counseling to help women develop coping strategies to deal with discrimination. The intervention group also received monthly supplies of high-protein foods, such as black gram and pigeon pea.

The Government of India estimates that about 2.40 million Indians are living with HIV (1.93 ‐3.04 million) with an adult prevalence of 0.31% (2009). Children (<15 yrs) account for 3.5% of all infections, while 83% are the in age group 15-49 years. Of all HIV infections, 39% (930,000) are among women. India’s highly heterogeneous epidemic is largely concentrated in only a few states — in the industrialized south and west, and in the north‐east. The four high prevalence states of South India (Andhra Pradesh – 500,000, Maharashtra – 420,000, Karnataka – 250,000, Tamil Nadu – 150,000) account for 55% of all HIV infections in the country. West Bengal, Gujarat, Bihar and Uttar Pradesh are estimated to have more than 100,000 PLHA each and together account for another 22% of HIV infections in India. The Indian epidemic is concentrated among vulnerable populations at high risk for HIV. The concentrated epidemics are driven by unprotected sex between sex workers and their clients and by injecting drug use with contaminated injecting equipment. Several of the most at risk groups have high and still rising HIV prevalence rates. According to India’s National AIDS Control Organization (NACO), the bulk of HIV infections in India occur during unprotected heterosexual intercourse. Consequently, and as the epidemic has matured, women account for a growing proportion of people living with HIV, especially in rural areas. The low rate of multiple partner concurrent sexual relationships among the wider community seems to have, so far, protected the larger body of people. However, although overall prevalence remains low, even relatively minor increases in HIV infection rates in a country of more than one billion people translate into large numbers of people becoming infected. All the high prevalence states show a clear declining trend in adult HIV prevalence. HIV has declined notably in Tamil Nadu to reach 0.33% in 2009 down from 0.58% in 2007. However, low prevalence states of Chandigarh, Orissa, Kerala, Jharkhand, Uttarakhand, Jammu & Kashmir, Arunachal Pradesh and Meghalaya show rising trends in adult HIV prevalence in the last four years. Most encouraging, the decline is also evident in HIV prevalence among the young population (15-24 yrs) at national level, both among men and women. Stable to declining trends in HIV prevalence among the young population (15-24 yrs) are also noted in most of the states. However, rising trends are noted in some states including Orissa, Assam, Chandigarh, Kerala, Jharkhand and Meghalaya. Recent data suggests there are signs of a decline in HIV prevalence among female sex workers in areas where focused interventions have been implemented, particularly in the southern states, although overall prevalence levels among other high risk group continues to be high. The HIV prevalence as per HSS 2010 are: female sex workers 2.61%; men having sex with men 5.01%; injecting drug users 5.91 %; and transgender 18.80 % .

In addition, the women in the AL group participated in six education sessions covering a variety of topics, including learning about HIV and AIDS, adhering to antiretroviral therapy, overcoming barriers and dealing with the illness. The courses also focused on improving coping, reducing the stigma of the disease, caring for family members and children, the basics of good nutrition and benefits of participating in a life-skills class. Women in the control group also attended the education sessions, but they did not receive visits and supportive services from the ASHA. They received only standard protein supplementation, not the high-protein supplements of the intervention group. Among the women in the AL group, the researchers found significant increases in therapy adherence and CD4+ T-cell levels, as well as significant reductions in internalized stigma, avoidance coping and depressive symptoms, compared with the control group. The women in the AL group also showed significant increases in body mass index, muscle mass and fat mass, compared with the other women. The pilot study holds promise for rural women and other populations afflicted by HIV/AIDS, Nyamathi said.
India has a population of one billion, around half of whom are adults in the sexually active age group. The first AIDS case in India was detected in 1986 and since then HIV infection has been reported in all states and union territories. The spread of HIV in India has been uneven. Although much of India has a low rate of infection, certain places have been more affected than others. HIV epidemics are more severe in the southern half of the country and the far north-east. The highest estimated adult HIV prevalence is found in Manipur (1.40%), followed by Andhra Pradesh (0.90%), Mizoram (0.81%), Nagaland (0.78%), Karnataka (0.63%) and Maharashtra (0.55%). In the southern states, HIV is primarily spread through heterosexual contact. Infections in the north-east are mainly found amongst injecting drug users (IDUs) and sex workers. Unless otherwise stated, the data on this page has been taken from a 2008 report by the Indian government’s AIDS organisation - NACO (National AIDS Control Organisation). ### Estimated number of people living with HIV/AIDS, 2009 People living with HIV/AIDS 2.39 million Adult (15 years or above) HIV prevalence 0.31% Previously it was thought that around 5 million people were living with HIV in India - more than in any other country. Better data, including the results of a national household survey conducted in 2005-2006, led to a major revision of the prevalence estimate in July 2007.  It is now thought that around 2.39 million people in India are living with HIV. Of these, an estimated 39% are female and 3.5% are children. Back-calculation suggests that HIV prevalence in India may have declined slightly in recent years, though the epidemic is still growing in some regions and population groups. ### NACO (2011) ‘Annual Report 2010-2011’ NACO (2008, October) ‘HIV sentinel surveillance and HIV estimation in India 2007: A technical brief’. NACO (2011) ‘Annual Report 2010-2011’ WHO (2007, 6th July) ‘2.5 million people in India living with HIV, according to new estimates’ NACO (2011) ‘Annual Report 2010-2011’
“The findings of our study lay the groundwork for a national model related to the benefits of training and working with ASHA in rural India in an effort to improve antiretroviral therapy adherence and reduce stigma and depression, as well as improve nutritional status,” she said. Findings from the study are currently available on online in two journals: the Western Journal of Nursing Research, and AIDS Education and Prevention. The study was funded by the National Institute of Mental Health, part of the National Institutes of Health. ### 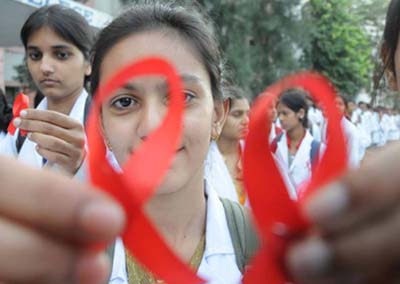 Other researchers on the ASHA-LIFE project were Catherine Carpenter Ph.D., a faculty member with the UCLA School of Nursing and the UCLA Nutrition Center; Sanjeev Sinha M.D., AIDS director from the All India Institute of Medical Sciences in Delhi; and Kalyan Ganguly, Ph.D., a behavioral scientist from Indian Council for Medical Research in Delhi; and Maria Ekstrand Ph.D., a clinical psychologist from the Center for AIDS Prevention Studies at UC San Francisco. The UCLA School of Nursing is redefining nursing through the pursuit of uncompromised excellence in research, education, practice, policy and patient advocacy. ### Laura Perry .(JavaScript must be enabled to view this email address) 310-794-4022 University of California - Los Angeles
Provided by ArmMed Media