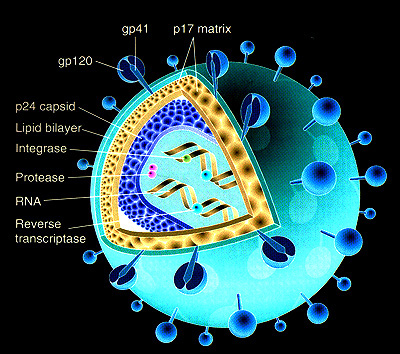 Case Western Reserve researchers are part of an international team that has discovered that a common herpes drug reduces HIV-1 levels—even when patients do not have herpes.

Published online in Clinical Infectious Diseases, the finding rebuts earlier scientific assumptions that Valacyclovir (brand name, Valtrex) required the presence of the other infection to benefit patients with HIV-1.

The result not only means that Valacyclovir can be used effectively with a broader range of HIV-1 patients, but also suggests promising new avenues for the development of HIV-fighting drugs. This insight is particularly significant given that some forms of HIV-1 have become resistant to existing medications.

Even better, Rodriguez said, studies by these groups helped illuminate exactly how the medication decreases HIV-1 levels. Valacyclovir is activated in virus-infected cells, and then blocks the ability of HIV to reproduce.

HIV-1 can lead to the immune deficiency known as AIDS. The herpes simplex virus 2 (HSV-2) causes periodic recurrence of genital herpes lesions, which increase the likelihood that a herpes sufferer may contract HIV through intimate contact. HSV-2 outbreaks are treated with either Acyclovir or the newer generation Valacyclovir, which requires less frequent dosing.

Scientists previously thought that Valacyclovir helped reduce HIV levels and worked by decreasing the immune activation caused by HSV-2. With fewer immune cells to attack, the theory went, HIV-1 could not spread as widely. Yet Leonid Margolis, PhD, of the National Institutes of Health (NIH), believed another explanation might exist. After conducting laboratory studies with Acyclovir, an earlier sibling drug of Valacyclovir, Margolis saw that the medication clearly blocked HIV-1 reproduction, even when HSV-2 was absent. Those results helped spur clinical trials of Valacyclovir in people, and Margolis is senior author of the resulting journal article.

Beginning in June, 2009, patients from UH Case Medical Center and from IMPACTA, the Civic Association for Health and Education in Lima, Peru, started participating in the trials, which lasted until July, 2012. Under its protocols, half the patients took Valacyclovir twice daily for 12 weeks, while the other half took a placebo for the same period of time. After a two-week break from any medications, the two groups switched: those previously on placebo got 12 weeks of the Valacyclovir, and those who already had taken the medication now received placebos. When study participants took Valacyclovir, their HIV viral loads went down, and when they took the placebo, their HIV viral loads went up. Ultimately, a total of 18 patients participated.

Lederman and Rodriguez, the two Cleveland-based members of the research team, believe that the data from this study can inform new drug development. Essentially, researchers would try to design agents based on the Valacyclovir’s molecular structure - now proven to block HIV activity.

“The drug might be an agent that can be used safely in some people with HIV infection who have a form of HIV that is highly resistant to other antiretroviral drugs,” Lederman said. “Valacyclovir might well augment the cocktail of medications they take for reducing HIV replication. Valacyclovir is a well-tolerated drug, and it doesn’t have a lot of side effects.”

While Cleveland and Lima were the only clinical trial sites, labs at the NIH and Emory conducted virologic studies of the trial participants’ blood samples. Rodriguez said that one of the key factors in bringing together such a geographically diverse team involved networking opportunities of the AIDS Clinical Trials Group. The group is funded by the NIH’s National Institute of Allergy and Infectious Diseases (NIAID), and the Division of AIDS, and it was established almost three decades ago to expand the scope of NIAID’s AIDS research efforts.

This research was supported, in part, by the Intramural Research Program of the NICHHD, NIH, by the NIH Bench-to-Bedside Program and by federal funds from the National Cancer Institute, NIH, under contract NO1-CO-12400. Lederman and Rodriguez are supported in part by NIH grants AI 68636, AI 76174 and by the CWRU Center for AIDS Research AI36219. Schinazi is partly supported by the NIH-sponsored CFAR grant 2P30-AI-050409 and the Department of Veterans Affairs.

Founded in 1843, Case Western Reserve University School of Medicine is the largest medical research institution in Ohio and is among the nation’s top medical schools for research funding from the National Institutes of Health. The School of Medicine is recognized throughout the international medical community for outstanding achievements in teaching. The School’s innovative and pioneering Western Reserve2 curriculum interweaves four themes—research and scholarship, clinical mastery, leadership, and civic professionalism—to prepare students for the practice of evidence-based medicine in the rapidly changing health care environment of the 21st century. Nine Nobel Laureates have been affiliated with the School of Medicine.

Annually, the School of Medicine trains more than 800 MD and MD/PhD students and ranks in the top 25 among U.S. research-oriented medical schools as designated by U.S. News & World Report’s “Guide to Graduate Education.”